The political tension in the country right now is palpable that even those in other countries can feel it. With the recent unexpected win of the Republican presidential candidate, now President Donald Trump, emotions have been high and even ordinary people get into heated arguments in real life and on social media regarding their political beliefs. 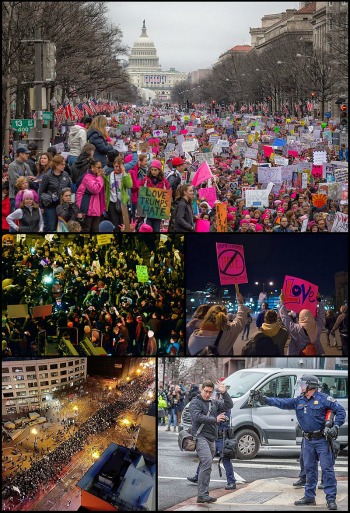 And this tension has been experienced since the campaign started – or even as early as when both parties were choosing who their presidential bets will be. The Clinton and Trump rivalry is even more intriguing and explosive than your average Hollywood movie. People were on the edge of their seats as the election unfolds until the winner was announced.However, people today refuse to be on the sidelines and have mustered the guts to fight for their rights. The rise in political activism allows their voices to be heard amidst the chatter of the controversial U.S. politics.

However, people today refuse to be on the sidelines and have mustered the guts to fight for their rights. The rise in political activism allows their voices to be heard amidst the chatter of the noisy U.S. politics.

For years, Justin Boyan worried about the effects of climate change but focused on his wife, his two daughters and his work as a computer scientist in Rhode Island. Then Donald J. Trump became president, and Mr. Boyan was jolted into political activism.

Within days of the election, Mr. Boyan began volunteering for the Working Families Party, a liberal political organization focused on income inequality, and attended almost weekly protests to voice his dismay. He traveled to the Women’s March on Washington with his family the day after inauguration, protested Mr. Trump’s travel ban at the Rhode Island state capital, and began studying criminal justice issues, which he connects to climate change as two issues where policy makers, he believes, have put the demands of big-money contributors over the needs of ordinary people.

The same energy motivating Mr. Boyan is bursting out at demonstrations and town hall meetings across the country. Protesters who had focused on issues like police shootings of black people, a $15 minimum wage and climate change are collaborating against a common foe, President Trump. In cities and states, activists are exchanging civil disobedience tactics, pooling financial resources and showing up to demonstrations about issues that they may not have previously focused on.

Call it Protest Nation: Activists across the country have been strengthening old partnerships and making new ones.

Political activism will probably be a constant threat to the new administration to ensure they remain level-headed and pass and enforce national policies and laws that benefit most Americans.

First, activists did not foresee Bush doing the destructive actions that Trump has already initiated. Second, the threatened deportation of millions of immigrants means that millions more know someone at risk from Trump. Third, millions are either personally impacted by the threatened loss of health care or know someone who is.

But this heightened activism involves more than Trump. The Sanders and Clinton campaigns both energized the progressive base. I think activists would have been just as fired up and excited to get positive laws passed had Clinton won the White House, though clearly there would not be the fear that Trump has so maliciously spread across America.

The last U.S. presidential election is perhaps the most divisive the country (and the world) has ever witnessed. Ordinary people became political activists who will stay vigilant considering the many outrageous things the new President have implemented so far.

The travel ban, the Obamacare repeal, “A Day Without A Woman,” Russian hacking—keeping up with politics is overwhelming right now. And it can be hard to know how to take action most effectively, whether you’re a progressive or a conservative. A San Francisco company called IFTTT is offering a solution: Online apps that automate the process, such as creating an email digest of tweets from Women’s March organizers or posting the Senate’s daily agenda to a Slack channel. The company just introduced a suite of tools, called applets, for causes on the political left and right.

Even though most political activists right now focus on their fight against Trump and his biased policies, real activism is actually neutral in nature. Activists react to everything that concerns (or affects) them whether it comes from the ruling party or the losing one.

It is a good thing that political activists can make the most of social media to reach a bigger audience. These new technologies serve as a bigger platform, so more people can hear their sentiments without spending much. After all, these new policies not only affect people in America but in other countries too on issues regarding open trade and immigration policies that have caused a stir not long ago.

source https://hdbizblog.com/blog/rising-political-activism-in-trumps-america/
Posted by Unknown at 10:21